Sing the Gloaming is a collaboration between Professor Simon Kirby and artists/musicians Tommy Perman and Rob St. John, taking its inspiration from Simon’s research in the University of Edinburgh’s Centre for Language Evolution.

Each singer was asked to find a place where light moves, then record short new vocal pieces around particular ‘light words’ there, thinking about the qualities of the space they were in, and those of the words themselves when recording their pieces.

The ‘light words’ in Sing the Gloaming are phonaesthemes, words whose form seems to evoke their meaning directly. In the English language, there are many beginning with “gl” which relate to light, for example: glimmer, glitter, glow, gleam and gloom. These words have all evolved from a single word spoken over 5,000 years ago near the Black Sea. Their different forms and meanings bear the hallmarks of their individual routes through history, across languages and cultures to present-day English.

Once each singer had finished their recordings, they were passed onto the next singer, who in turn listened and improvised their own ‘light word’ piece. Melodies emerged and evolved in this process: mirroring the real-world evolution of the words themselves.

The resulting recordings were (re)composed using a series of innovative production techniques, using modular synthesisers, granular synthesis and convolution reverbs created directly from data on the use of the “gl” words in five million books published since 1500.

But for all its conceptual thinking and tinkering: the new record is a playful and joyous listen. The vocals wash in and out, creating new clusters of chords, melodies and rhythms, each singer collaborating with the next, their collective efforts coalescing like the words in language itself. Four additional pieces see Simon, Tommy and Rob develop the source material in creative and unexpected ways. 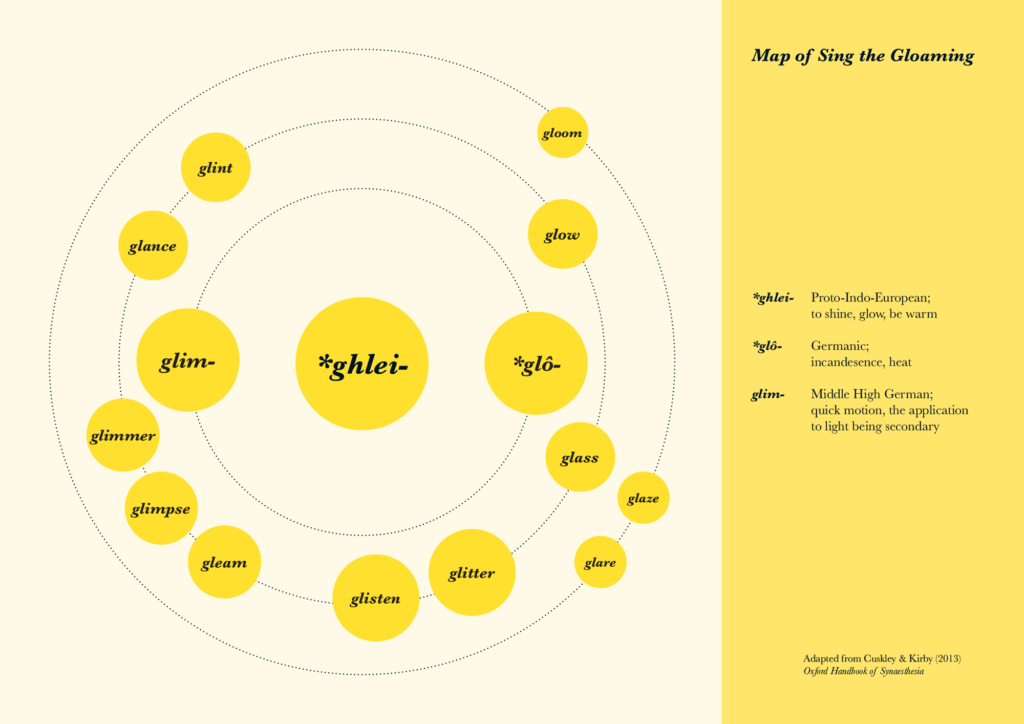 There’s nothing particularly catlike about the word cat. Like almost all the words in all the languages of the world, the sequence of sounds that make up this word are essentially arbitrary. They are the end result of a process of convention formation that arises from the myriad interactions between speakers of a language spread over time and space. However, there are some words in some languages where this arbitrariness appears not to hold so clearly…

Think of an English word beginning with the letters ‘sn’.

There’s a reasonable chance you may have come up with a word that relates to the nose in some way (e.g., sneeze, snore, snout, sniff, sneer…). It seems like something about these words is, after all, in some way nose-like. These little-understood words are called phonaesthemes, and they exist in pockets of the lexicon where the normally arbitrary nature of language breaks down. Their form seems to evoke their meaning more directly.

Why do phonaesthemes exist? We don’t currently know for sure, but one theory is that they are a natural product of the winding paths that words travel down through history as they are shaped by the process of cultural evolution. With Sing the Gloaming you can walk these paths yourself and understand the origins of the most celebrated phonaestheme cluster in English: the “gl” phonaesthemes, which relate to light.

Around 5000 years ago, somewhere near the Black Sea, a language was spoken that would eventually give rise to over 400 languages spread around the world today. In that language, which we now call Proto-Indo-European, there was a word form *ghlei- that meant to shine, glow or be warm. As this language changed and gave rise to other languages like Proto-Germanic, and later on Middle High German, this word changed slowly in form and meaning and gave rise to new words, which themselves changed and multiplied over the centuries. Finally, as we reach the current day, many words in English ended up sharing similar forms and similar meanings because of their shared ancestry, stretching back to the very origins of the Indo-European people.

Explore this evolution by walking between the devices and listen to how the words relate to one another. Join in by singing along with the words yourself. Travel backwards in time to the language spoken two hundred generations ago, or forward to the current day and consider the metaphors and relationships hidden within the meaning of the words of your own language.

Simon Kirby is Professor of Language Evolution at the University of Edinburgh, and elected Fellow of the Royal Society of Edinburgh. Simon’s academic research is concerned with the origin and evolution of language, and the unique ways that culture and biology interact in our species. Simon has collaborated on a range of widely exhibited artworks including Etiquette (2007), Three Pieces (2008), Cybraphon (2009), End of Forgetting (2011), #UNRAVEL (2012), Tasting Notes (2013), Great Circle (2014) and Concrete Antenna (2015). Cybraphon won a Scottish BAFTA in 2009 and is now part of the permanent collection of National Museums Scotland. With FOUND, he won the List Award for “outstanding contribution to Scottish Arts”. Simon was included in the Sync List of people “doing remarkable things in the space where technology meets arts”.
www.lel.ed.ac.uk/~simon

Tommy Perman is an artist, designer and musician with an interest in the spaces where these three disciplines meet. He has exhibited extensively and released lots of records. Tommy lectures in Communication Design at Duncan of Jordanstone College of Art and Design at the University of Dundee.
www.surfacepressure.net

Rob St John is an artist, writer and academic. His interdisciplinary work often involves landscape writing, art-science collaboration, sound recording and film-making, and has been shown at Tate Modern, London, Edinburgh Sculpture Workshop and Stour Space, London, alongside numerous publications and releases. Rob is a PhD researcher in cultural geography at the University of Glasgow, working on art-geography exchanges, Anthropocene landscapes, and György Kepes’ interdisciplinary practices and publications at MIT in the 1960s.
www.robstjohn.co.uk